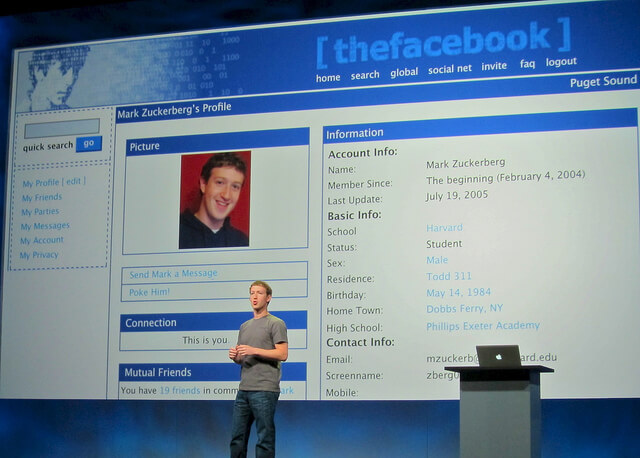 This month marks the date when Facebook officially becomes an adult, 18 years old. Yes, now it is called Meta..we’ll get into that later. But first, let’s have a quick dive into how it all came about.

‘The Facebook’ was launched by Mark Zuckerberg, a Harvard sophomore at the time, in February 2004. It was initially intended to be a social media site to connect Harvard students with each other. The site was a hit right away, with over a thousand people registering in the first 24 hours after it was launched. That was only the beginning though, today Facebook is one of the most valuable companies in the world and has over 2.9 billion monthly active users.

Mark Zuckerberg was studying psychology at Harvard University when he founded Facebook. If you have watched ‘The Social Network’ you will know that the origins of Facebook have come under some scrutiny and the exact source of the idea/conception of Facebook is somewhat unclear. What we do know though is that Zuckerberg had a knack for coding and causing a bit of commotion. The year before Facebook was conceived he became a sort of celebrity at Harvard for creating FaceMash. This was a website where two randomly selected women (studying at Harvard) were pitched against each other and students could vote on who was more attractive. Obviously, it was shot down by several women’s groups and the head administration. Although short-lived, its popularity showed Zuckerberg the value in creating a campus wide social network.

Zuckerberg built Facebook over his Sophomore year. In February 2004 it was launched as ‘The Facebook’, with its name taken from the sheets of paper handed out to freshmen, profiling the students and staff. It expanded rapidly to other schools in the Boston area and the rest of the Ivy League by spring 2004. By the end of 2004 the site had 1 million users and a new angel investor, Peter Thiel, who invested $500,000. Zuckerberg then left Harvard and moved to California, to run Facebook from its new headquarters. In August 2005, it became ‘Facebook.com’ as the address was purchased for $200,000. From September 2005 US high schools could sign up, with UK universities able to sign up from October 2005. From here, Facebook spread across the world. From September 2006 it wasn’t just limited to educational institutions, as anyone with a registered email address was able to sign up. From here, Facebook spread across the world. The site also remains free to this day and it generates profit through advertising revenue. It is sometimes referred to as ‘Web 2.0’ as it is considered to be one of the major forces that brought about the highly-participatory, user generated content phase for the internet.

Back to the controversy…

The legal case against Mark Zuckerberg dates back to September 2004. Divya Narendra and the Winklevoss brothers, Cameron and Tyler, founded the social-networking site ‘ConnectU’ and accused Zuckerberg of copying their ideas and coding. Zuckerberg had worked for them as a coder whilst they were all at Harvard, before Facebook was created. In March 2007, this case was dismissed though due to a ‘technicality’ and without a ruling.

Facebook has also come under scrutiny for user privacy, for allegedly selling its user’s data and for allegedly failing to correctly and sufficiently protect it. Privacy was first a serious problem for the company in 2006, once it introduced the News Feed. This was where people could see every change that was made to their friend’s pages. Users fought back against this, leading Facebook to quickly implement privacy controls to allow a user to filter what appeared in their News Feed. More privacy controls and settings are now available as users are more outspoken than ever on what they need/want.

In October 2021 Zuckerberg announced that he would be changing the name of the parent company to ‘Meta Platforms’. This name was derived from the metaverse, where users can interact in virtual reality environments. Zuckerberg most recently stated, “The metaverse is the next frontier in connecting people, just like social networking was when we got started…Over time, I hope we are seen as a metaverse company, and I want to anchor our work and our identity on what we’re building towards.”

This type of technology is exciting as it will provide people with the opportunity to transport themselves to a completely different time and place. It truly is transformative technology and it will be interesting to see how Facebook, aka Meta, develops with this.

“At last – The full story of how Facebook was founded”. Carlson, Nicholas. March 2010